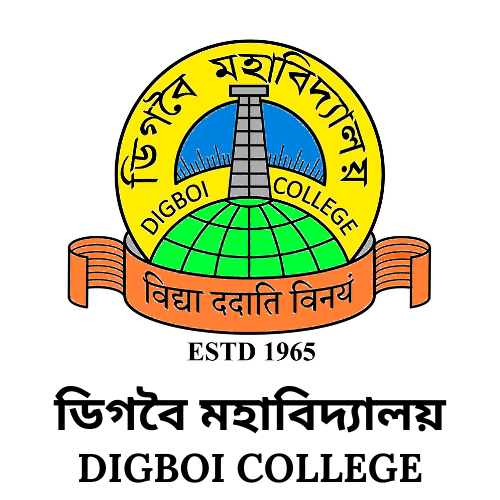 The emblem of the College was designed by Late Bimal Gogoi, an ex-teacher of the college and ex Inspector of colleges, Dibrugarh University and Late Hari Bhakta Kotowal, an ex-student of the college, a renowned painter and sculptor of his time who later became the Royal Poet of Nepal.

The upright structure on theglobe as depicted in the emblem is not only witness to the historical legacy of Digboi as the first oil township in Asia but is also symbolic of the ladder of knowledge which would enable us to reach our goal even beyond the limit of the horizon. The wings on either side of the base signify that with the help of education, we can soar high to attain the goal set in life. The sunrays symbolises hope and enlightenment that would dispel the darkness of life and illuminate the whole world.

The emblem is symbolic of the ethics and values that the college believes in and desires to infuse into our social fabric. The Citation from “Hitopadesha” at the base upholds the motto of the college.