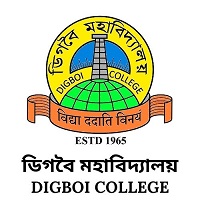 Digboi College, a premier institution of higher education affiliated to Dibrugarh University was established in 1965 in the historic oil town of Digboi, Assam.

A handful of dedicated educationists and social activists took the initiative to start a college in Digboi. Their dream came to reality on 15th July 1965. The benevolent role performed by Indian Oil Corporation Limited (AOD) in the growth of the college deserves special acknowledgment. The college has come a long way in imparting education in the undergraduate level in Arts, Science and Commerce stream –both Major and Non Major and has recently introduced regular MSc in Physics.

At present there are 20 departments in the college with student strength of 1997. It is a provincialized college under Govt. of Assam. The college has been able to carve the status of one of the best colleges of Dibrugarh University. With its consistent quality performance in academic and allied arenas and radical contribution to research, it has been able to achieve craved recognitions STAR college scheme for the departments of Botany, Chemistry and Physics as well as recognition and grant under Community scheme and Finishing School of RUSA.

The college has a vision of imparting quality education. Quality education would prepare students to cater to the demands of a modern technological and global world while inculcating in them the values and cultural heritage for which India is so known to the world.

Digboi College is situated atop a hillock, just a few meters south of Digboi-Duliajan road. It has a sprawling campus of 25 acres of land endowed with exotic beauty of hills and lush green forests. The college campus has been naturally gifted with a rich bio-diversity.

The Motto of the college “विद्या ददावि विनयं” signifies that knowledge endows one with modesty which embodies humbleness, discipline and cultured mannerism. Modesty begets worthiness leading to right conduct, contentment and finally happiness.

The college seeks to:

The emblem of the College was designed by Late Bimal Gogoi, an ex-teacher of the college and ex Inspector of colleges, Dibrugarh University and Late Hari Bhakta Kotowal, an ex-student of the college, a renowned painter and sculptor of his time who later became the Royal Poet of Nepal.

The upright structure on theglobe as depicted in the emblem is not only witness to the historical legacy of Digboi as the first oil township in Asia but is also symbolic of the ladder of knowledge which would enable us to reach our goal even beyond the limit of the horizon. The wings on either side of the base signify that with the help of education, we can soar high to attain the goal set in life. The sunrays symbolises hope and enlightenment that would dispel the darkness of life and illuminate the whole world.

The emblem is symbolic of the ethics and values that the college believes in and desires to infuse into our social fabric. The Citation from “Hitopadesha” at the base upholds the motto of the college.